Too much fat can damage people's appearance and athletic ability. May also cause various diseases. Too much fatty tissue can be located in various parts of the body, including the thigh, buttocks, abdomen, knee, back, face, arms and other areas. And an excess of adipose tissue may be cause ugly appearance formed by cellular. Excess body fat also related to significant health risk. So we need effective method to control or eliminate excess body fat. the technology is a cosmetic surgery procedure that slims and reshapes specific areas of the body by removing extra fat deposits. Usually operated by the Plastic Surgery or dermatologist with a special surgical instruments for the technology , it is an invasive way to remove subcutaneous fat tissue.
There are also possible fatal complications and negative side effects associated with having the technology . These temporary factors include swelling, painful bruising, pain, numbness, limited mobility and allergic reaction.In addition, technology is of high cost. There are other new emerging technologies to remove subcutaneous adipose tissue, including led-assisted technology and high-intensity focused ultrasound..
Other non-invasive way to remove excessive fat including drugs, diet pills, regular exercise, diet control, or a combination of these methods.A disadvantage of these treatments is likely invalid, and even in some cases impossible. For example, when a person physically injured or sick, you can not select the way of regular exercise. Similarly, when the diet pills or external use of drugs are allergic or cause adverse reactions, in addition, the use of physical or systemic approach to lose weight, you can not eliminate the body fat of a selected area.
The Cooling procedure using is fundamentally different from other non- or minimallyinvasive modalities, and it was approved as the most effective way to fat reduction. This revolutionary new nat loss method, which is approved as an important technology progress in fat reduction since it is put into use.For those people who is on diet, do regular exercise but still remove local fat, Cooling definitely a great gift. For fat intensive parts and less parts, such as love handles (flanks), and back fat. (loose fat above the hip on both sides of waist), belly and back fat, Cooling can produce stunning results .

Before operation:
1.Each part needs 30 - 60 minutes (depending on the fat thickness and health ).
2.Only a portion of a part of the operation of fat, for example, to eliminate the fat in the waist, you need to complete a few courses.
3. After a course of operation , and another one of the cooling process in the same position for 2 to 3 months, can reduce the redundant fat layer thickness, after two times of operation , can enhance the frozen fat dissolving operation, but is not recommended for multiple randomized operations.
4.Frozen fat dissolving operation is mainly directed against the local hypertrophy fat accumulation zone to design, the physical health of people, but not for the overall obesity, mainly used for the operation of a particular part, such as the fat in the waist, abdomen and back, and other local fat. Its operation is not omnipotent, not the operation of obesity, it cannot replace it or other invasive operation . Substantial weight reduction should by eating a balanced diet and regular exercise, frozen fat dissolving operation can only carry extra fat elimination.
operation process in the application of qualified antifreeze, when the temperature is lowered to 0 to - 40 degrees to avoid frostbite. [ consumables, buy their own ]


In operation:
1.operation, testing to see whether it is normal heart rate [50-100 ].
2.Check the thickness of fat.
3. Clean the operation area, area of hair removal operation.
4.Marking the operation zone size.
5.In the operation of areas with antifreeze.
6.At the operation site paste antifreeze membrane.
7.Patients undergoing operation , should sit so that the upper torso and thigh was 90 degrees.
8.The cooling device to gently suck into the operation site, and setting the vacuum suction strength.
9.Regulate the suction strength to the appropriate time, maintain a constant suction, suction can according to customer 's ability to accept appropriate adjustment. At the same time to meet the suction massage mode.
10.operation of 25 - 30 minutes, press the stop control keys, stop suction., screening and adding antifreeze.
11.Repeat steps 10 to 11, until the completion of course [again ] power off by pressing the start button.


The matters Requires your attention:

1. The equipment must be operated by professionals.
2.Do not use without antifreeze.
3.Patients with the use of the following medical electronic equipment cannot be used by the device:
- The implantation of a pacemaker or other implantable electronic device;
- To preserve the life of the artificial heart lung machine;
- Portable electrocardiogram measuring equipment;
4.Following patients in the use of machine before the professional doctor agree
- Patients with acute diseases;
- Malignant tumor;
- Patients with infectious diseases;
- Pregnant women;
- Patients with heart disease;
- Patients whit a fever;
- Being treated or those with physical anomalies in patients;
-With Liver problems, Raynaud's disease, severe cold urticaria, cold globulin hematic disease, cold fiber hypoalbuminemia, severe burns, severe diabetes and older adults, children, frail and very resistant to freezing.

5.Patients following the use of this device should be careful
- For babies and toddlers;
- Sensory or physically impaired person;

1.Before power on the machine,pls make sure that there is a amount of water in the tank.
It is around 2.5L unitl the overflow hole can see the water out.

2.Power on the machine and use -5 degree of temperature.
5 mins later,please check if the metal part in the handpiece is with ice or not.

3.the operation should be within the temperature 2-3 degree,(Above 0 degree) for the first time use.
The operation time is about 15mins.
And after 5 mins,pls pulse the operation and check the operated part of body to see if there is some burn or unconfortableness.
Because different person has different levels for the cold tolerance. 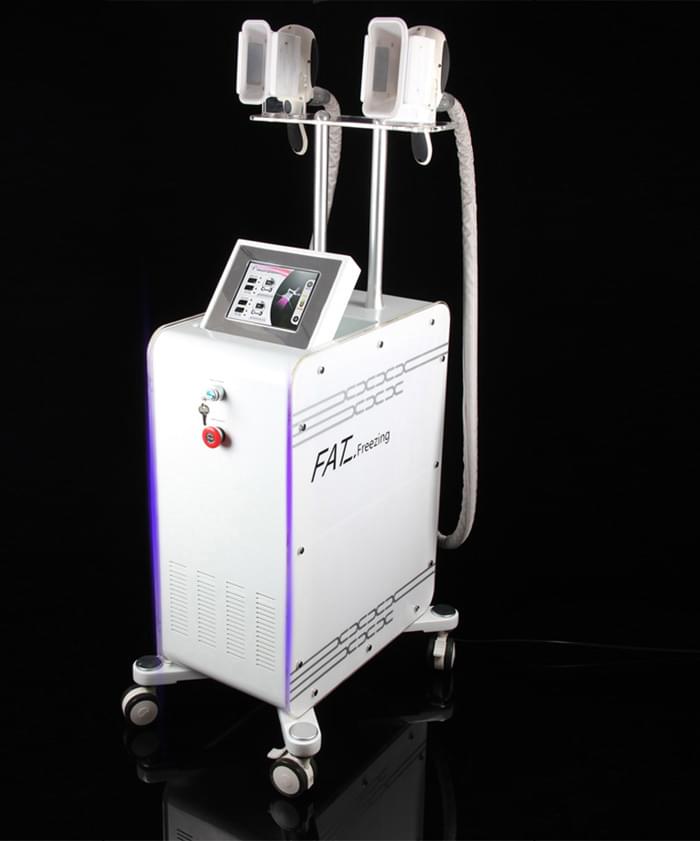 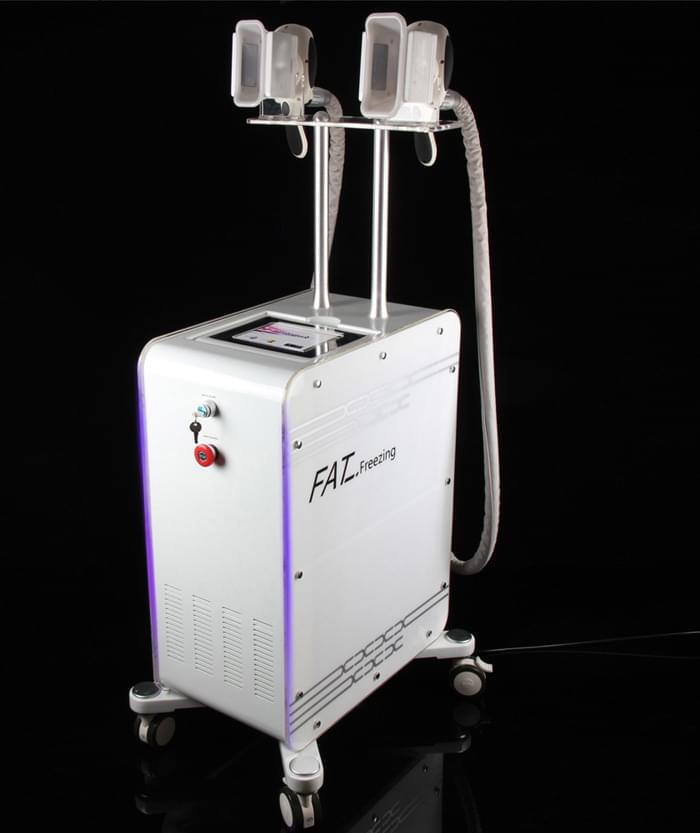 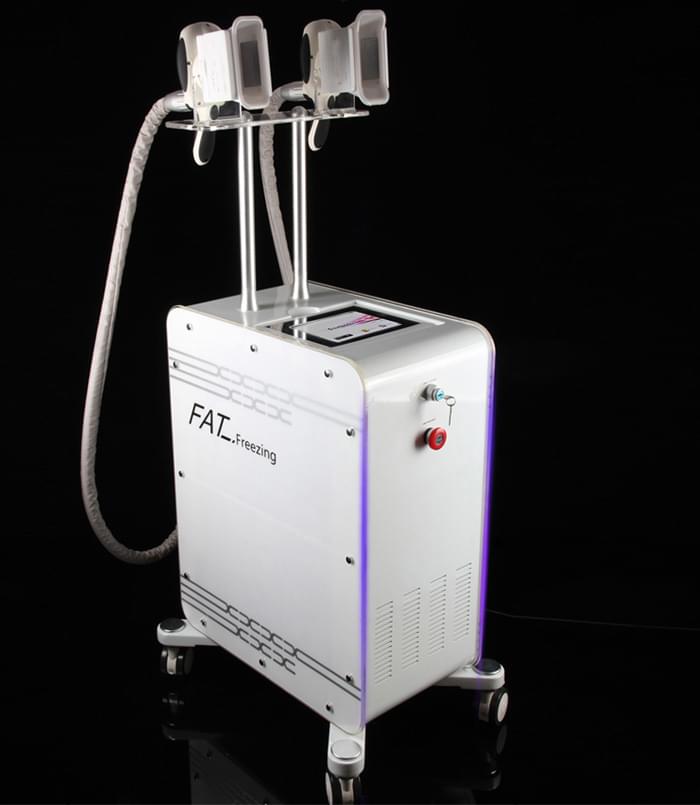 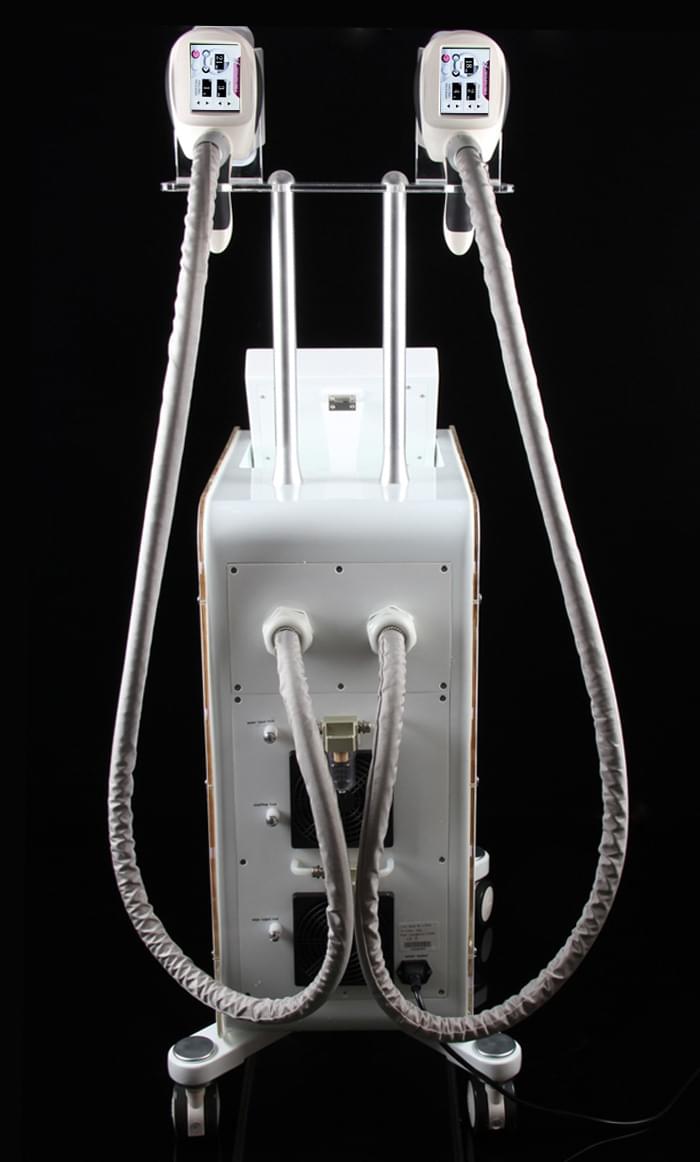 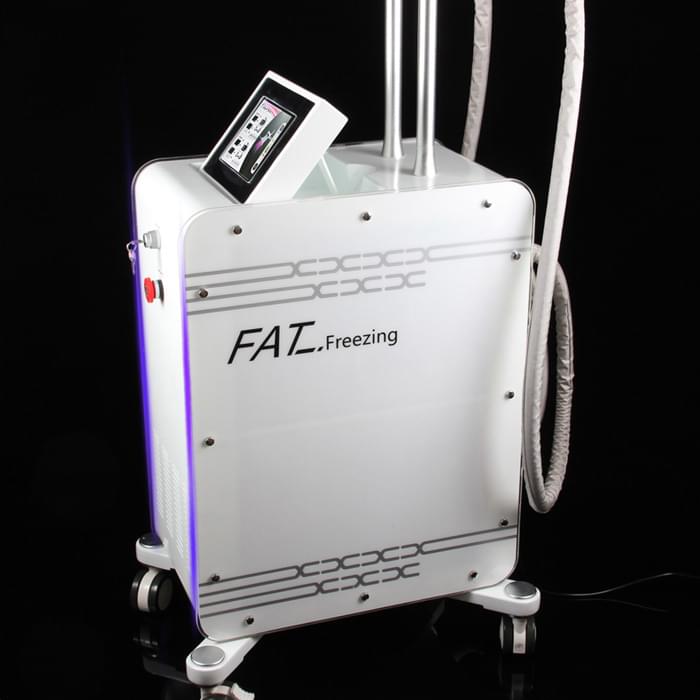 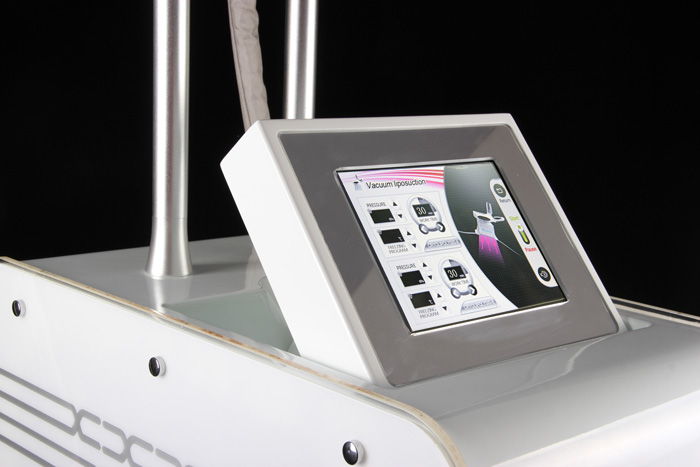 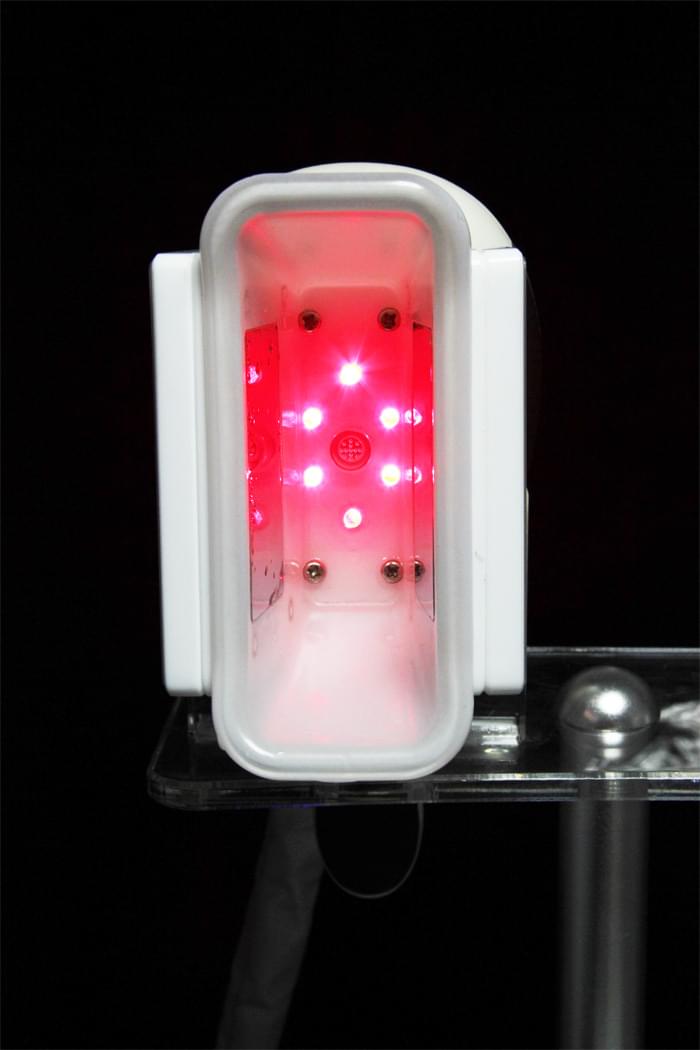 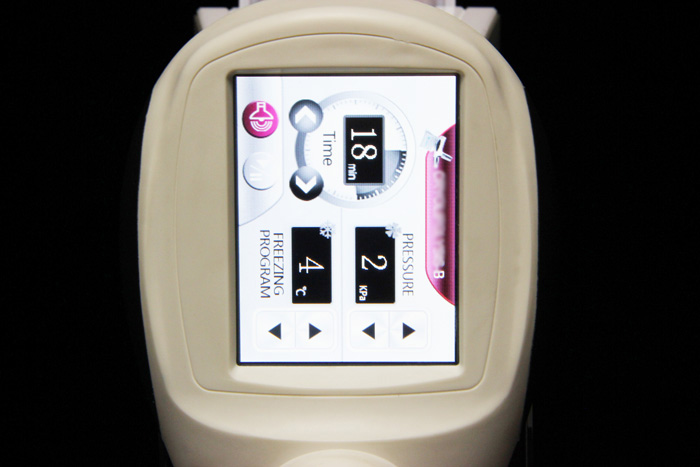 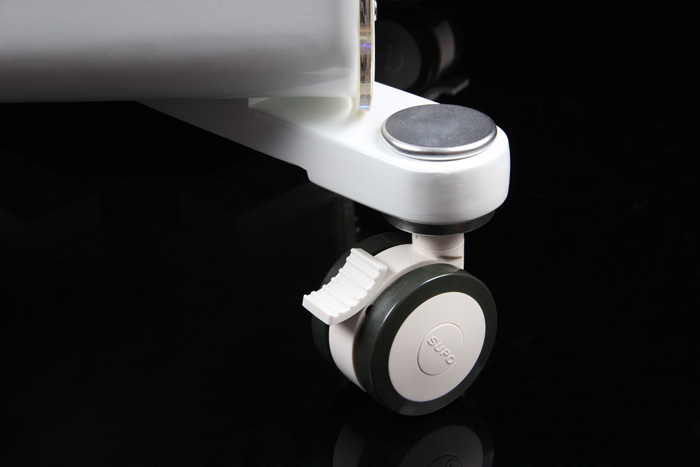 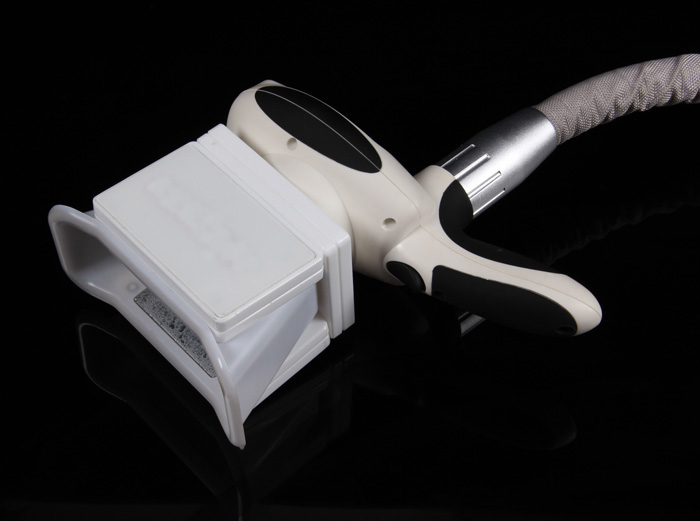 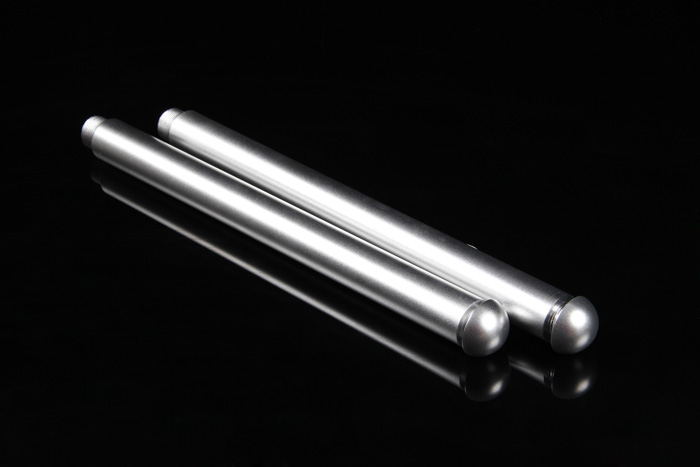 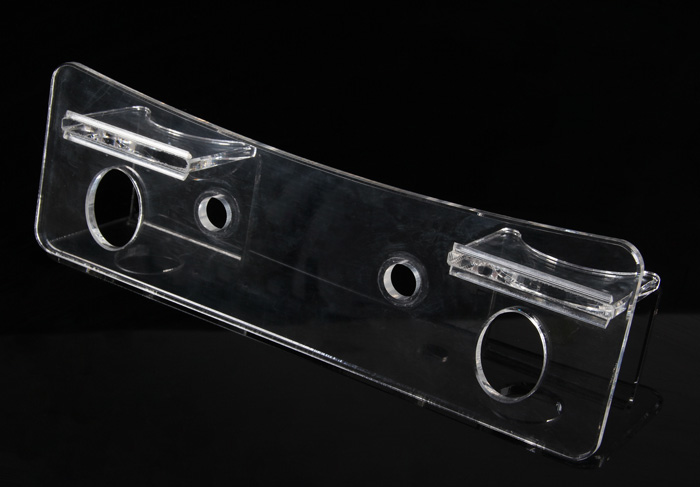 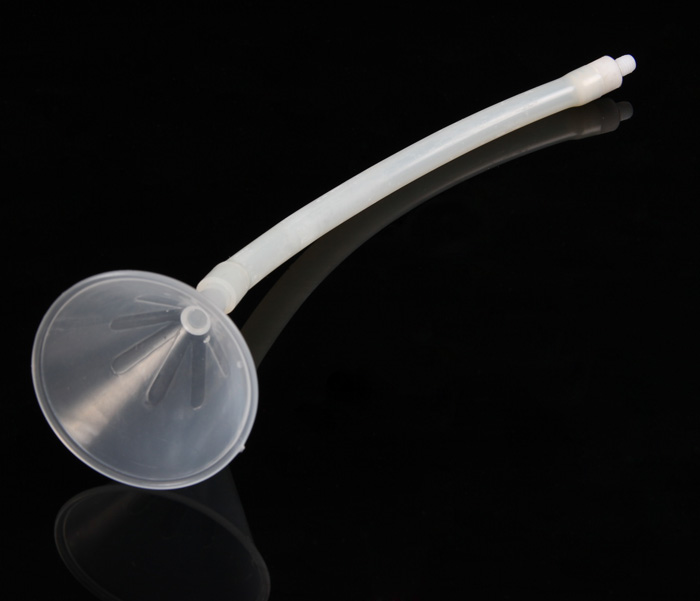 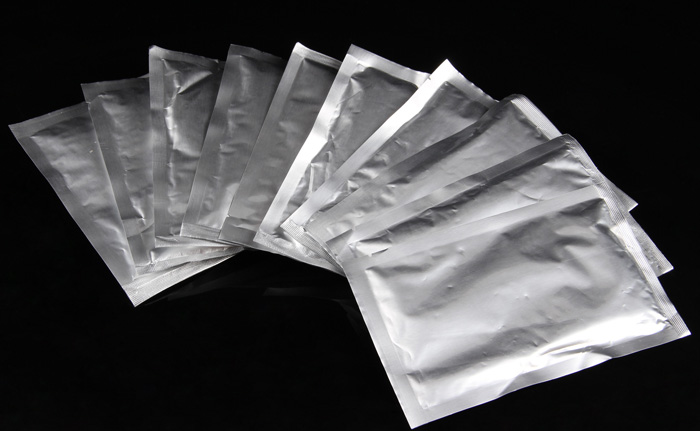 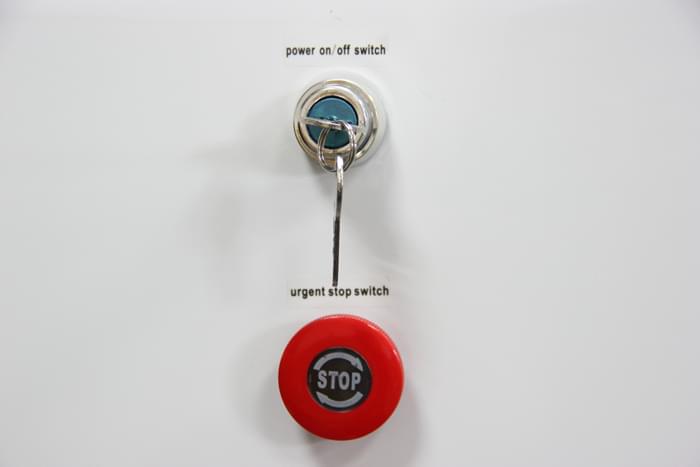 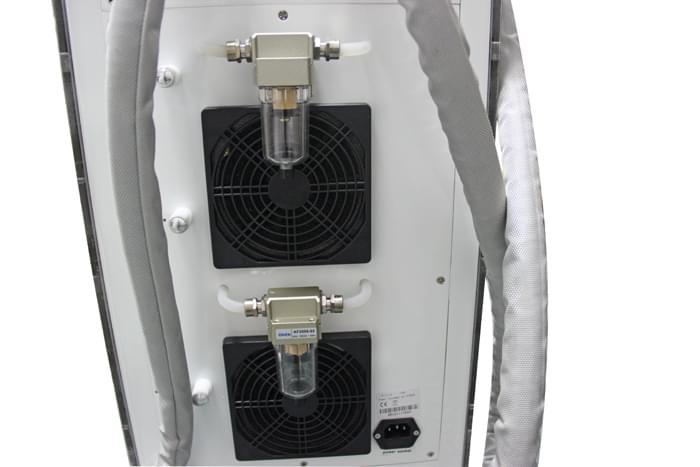 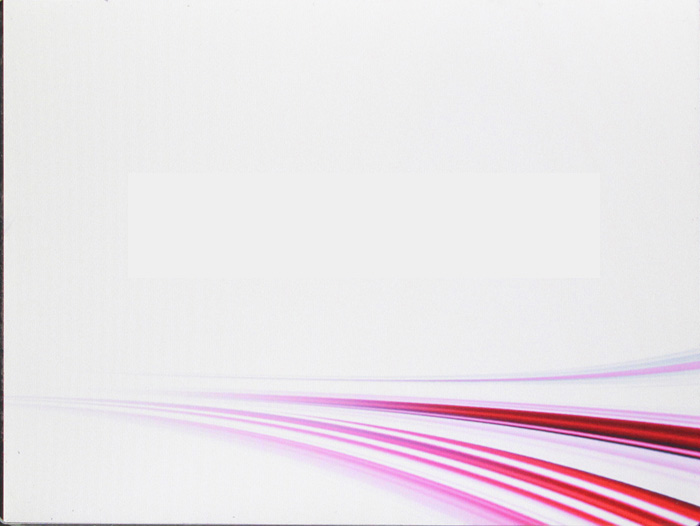 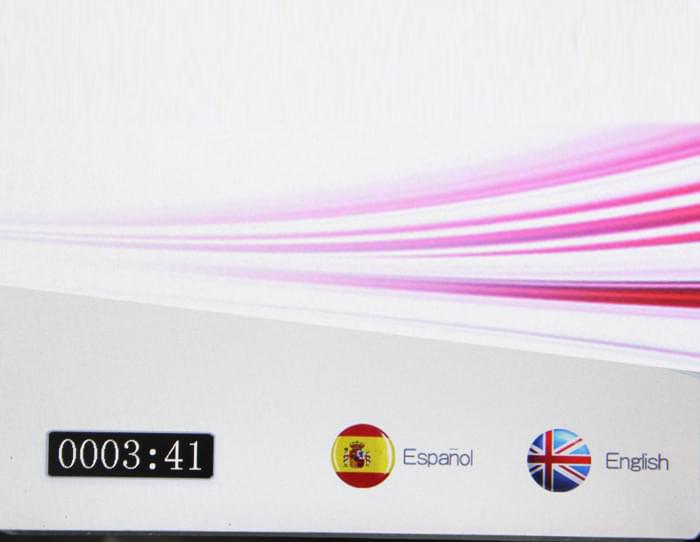 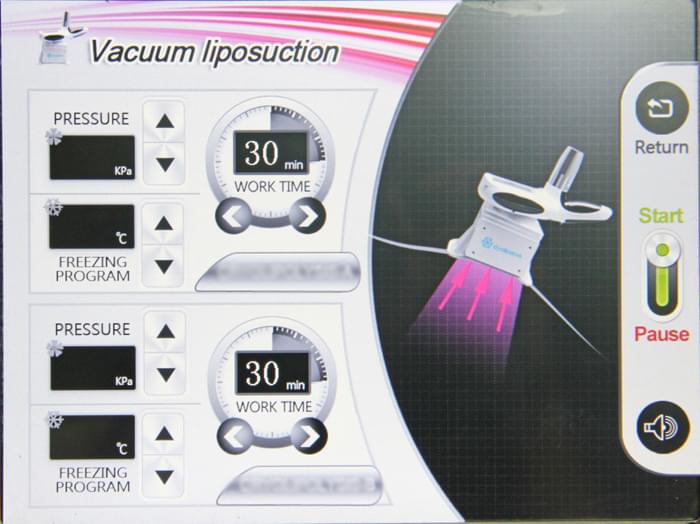